Emrich “Imi” Lichtenfeld (sde-or) the founder of Krav Maga (contact fight) was born in 1910, in Budapest, Hungary. Inspired by his father he began to practice a variety of sportive activities. He excelled in swimming, gymnastics, wrestling and boxing. In 1928 he won the teenage wrestling championship in Slovakia and in 1929 he won the national championship. In the same year he won the Slovakia national boxing championship as well as an international championship in gymnastics. In 1942 Imi immigrated to Israel and was drafted by Izchak Sade to “the Hagana”. In 1944 Imi was guiding soldiers in his fields of expertise: physical training, swimming, assault and defense with a knife and face-to-face combat using sticks (a technique taken from the English police). Imi’s status was established as a P.E. teacher in charge of self-defense. After the declaration of independence Imi joined the I.D.F and carried on as head P.E. and Krav Maga instructor. Imi continued to develop defense exercises against: knifes, firearms, spear rifle and various attacks. According to his saying: “The shortest and the fastest way”, he incorporated exercises from Jujitsu such as grip releases. 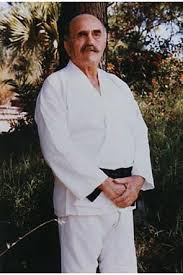 And so Krav Maga (contact fight) had begun in the I.D.F. In time Imi noticed that some of the exercises were too complicated, and could not be performed by all the soldiers, so he revised and adjusted the exercises so that every soldier could perform them after a short practice. Imi retired from the army in 1964 and went on to establish a private training center in Netanya: Krav Maga, Jujitsu and Gymnastics. In civilian life, Krav Maga had developed to new heights; civilians who were interested in self defense compared the method to other techniques, stimulating the development in the method. The methods ideology was to prevent getting hurt, by and “Do what you can, but don’t get hurt” and by utilizing the “simplest easiest way”. According to this ideology Imi developed new exercises suitable for every person. In 1971 Imi granted the first Black belt in Krav Maga to his loyal and talented student, Eli Avikzar, who in time continued developing Krav Maga (known today as Krav-Magen) and later on founded the Israeli Krav Magen association – K.A.M.I.

Led by Grand Master Avi Abeceedon, and a professional team of instructors with an extensive teaching experience in Krav-Maga and Security fields. Our training programs are offered for all levels of Instructors and Coaches in Krav Maga and Martial Arts in Israel and abroad.

All rights reserved. The Academic College at Wingate KRAV-MAGA SCHOOL
Scroll to top
Skip to content