Eli Avikzar immigrated to Israel from Morocco in 1963 as a boy with nothing in his pocket, except a rich background of street fights from his hometown, Casablanca. He was forced to fight local gangs who were harassing him for being Jewish in a hostile Arabic environment.

Eli began training with Imi Lichtenfeld (Sde-Or), the founder of Krav Maga (Contact Fight) in November 1964 at his institute in Netanya, and became his principal student. In those days there were no training outfits or grades for Krav Maga, so they trained in army uniforms. In 1965 Imi added Judo training, as part of the Krav Maga training and distinguished teachers like Gadi Schornic and Amos Grinshpen became Eli’s Judo instructors. 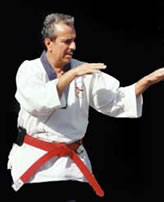 Eli trained twice a week, and after receiving his Orange belt in Judo and with Imi’s consent, went to train in Tel-Aviv, where he continued practicing Judo and added Karate and Jujitsu to his training schedule. Eli would then return regularly to Imi’s training classes and together they improved and developed counter exercises to Judo, Karate and Jujitsu. Imi stuck to the motto that every person, with or without coordination, strong or weak, can perform Krav Maga exercises, by utilizing ones own maximum force.

Until 1968 there were no grades in Krav Maga and trainee’s grades were determined largely by his knowledge in Judo.

In 1968 Eli Avikzar began learning Aikido under the guidance of an Englishman named Mike and within a year became his training partner. Mike was astounded by Eli’s rapid progress and offered him to go abroad for his Black belt trainings in Aikido. Following mike’s recommendation, Eli left for France in 1971, past the test and received a brown belt in Aikido. Prior to his journey, Eli received his Black belt in Judo, in addition to the first Black belt ever given in Krav Maga, which he received from Imi on the 1.5.1971. Upon his return, Eli started working as an instructor alongside Imi in both Netanya and Tel-Aviv training centers. In addition, they trained special army and volunteer units. In 1977 Eli went to Germany and after passing the test, he received a Black belt level in Aikido from the European Federation.

In 1974 Imi retired and handed Eli the Krav Maga training center in Netanya. In 1976 Eli joined the permanent force, as head of the Krav Maga section. The role of Krav Maga in the army advanced greatly after his appointment. More courses were given and every P.E. instructor was obliged to learn Krav Maga and teach it. The improvement of Krav Maga in the I.D.F. was a result of the development of methods and exercises in civil life, and it became accepted and more professional, proving its efficiency in fighting units. Eli continued to develop Krav Maga within the I.D.F. until his retirement in 1987. Up to this date, Eli had trained 80,000 male soldiers and 12,000 female soldiers.

In 1979 Eli appointed his first two black belts to trainees:

Led by Grand Master Avi Abeceedon, and a professional team of instructors with an extensive teaching experience in Krav-Maga and Security fields. Our training programs are offered for all levels of Instructors and Coaches in Krav Maga and Martial Arts in Israel and abroad.

All rights reserved. The Academic College at Wingate KRAV-MAGA SCHOOL
Scroll to top
Skip to content